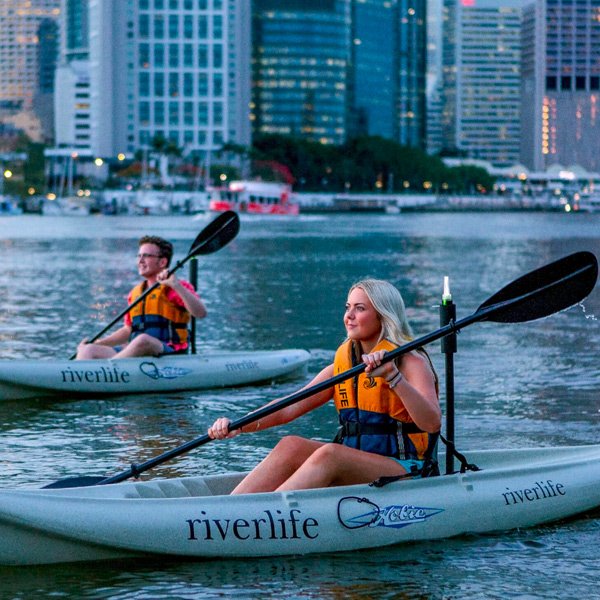 Come discover what Brisbane has to offer on a unique Brisbane City Twilight Kayak Experience! This experience is ideal for date nights and anniversaries adding a little pizazz to your evening that will definitely earn you some brownie points.

The tour sees you enjoying a relaxing 90-minute kayak journey on the iconic Brisbane River either heading towards Story Bridge or Southbank, depending on the tide. Take in the sensational city and river views in the early evening light, gliding under Brisbane’s inner city bridges and cutting through the luminous reflections of the city on the water.

Riverlife’s kayaking adventures are guided by qualified and experienced instructors. No experience is necessary as each session includes full instruction, a safety briefing and all equipment including a personal flotation device. Bookings essential.

Safety while kayaking at Riverlife

We are dedicated to showing you a great time kayaking on the river, but safety is always our priority. Before every session we will provide a full safety briefing. We will cover everything that you need to know in this briefing, however, here are a few things you can be aware of before getting started:

The Brisbane River is a fully operational transport hub, unlike other areas you may have kayaked before. That means there are plenty of larger and faster crafts than kayaks on the water. Please stick to the passive craft lane, which your guide will point out to you.

If You Fall Out Of Your Kayak, Don’t Panic!

Every Riverlife kayaking participant is given a Personal Flotation Device (PFD). The first thing to remember, if you do fall in, is do not panic. There are simple and safe techniques for getting back in which are demonstrated in your safety briefing. If you can’t swim that’s okay! Just please ensure you have booked a guided experiences. That way, our fully-qualified instructors can help you along the way.

Riverlife operates with a Zero Tolerance Drugs & Alcohol policy for all activities. Because of this, if found to be in breach of this policy, you can not participate in the adventure. Should you arrive intoxicated, there are no option for rescheduling or refunds. However, if you are looking to have a drink afterwards, we have alcoholic beverages available.

What is the minimum age?
The minimum age for day kayaking tours is 8 years old. Children 12 years of age and under must be accompanied by an adult.

What do I wear?
Wear clothes that are comfortable, e.g. activewear, and that you do not mind getting wet. Showers and change rooms are available onsite. Kayaking is a barefoot activity.

How long does the tour run for?
Our guided kayak tours run for 1.5 hours along the Brisbane River.


Do I need any experience?
No! Our highly-qualified kayaking instructors will guide you through your entire experience making sure you are confident on the water.

What happens if I fall in?
Whilst unlikely, if you fall in do not panic. One of your guides will assist you in getting back in your kayak using the instructions given during your safety briefing.

Do I need to know how to swim?
While useful, you will have a Personal Flotation Device (Lifejacket) to ensure you are floating if you fall in. Your instructor will be nearby to assist you.

Do you have tandem kayaks?
We only have single kayaks at our Riverlife location, however, our Walkabout Creek Adventure property has tandem kayaks available for hire, here.

Where do I meet for the tour?
Kayak tours depart from Riverlife’s pontoon at Riverlife Adventure Centre, Naval Stores, Kangaroo Point. Find directions and parking here.

Can I book at a time that’s not advertised?
Yes! We accept private group bookings (6 pax minimum) at any time of your choosing during opening hours. Book this here.

ABOUT BRISBANE & THE BRISBANE RIVER

Can’t find a time that suits you?

Excursions & day trip packages to cater to your Schools needs.